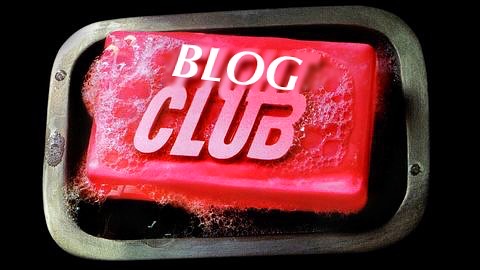 The rules of Blog Club –

#1 : You talk about and promote Blog Club

#2 : You TALK ABOUT AND PROMOTE Blog Club

#8 : If this is your first night at Blog Club, then you have to write

Back a couple of years ago in 1999, a sensational book turned movie hit the screen and left its lasting impression on my then adolescent brain. Fight Club, written by Chuck Palahniuk, had everything a reader could ask for: fluid storytelling, epic narration, memorable characters, and witty tag lines.

A couple of years after the book was released, the team of David Fincher, Brad Pitt, Edward Norton, Helena Bonham Carter, and the rest of the supporting cast and crew was going to create something tragically beautiful, something people would continue to reference for the years to come. Fight Club was going to be “that” movie to cling to the walls of people’s minds, just as the movie posters continue to do on the walls of people’s houses. For me, though, Fight Club is more than just a slide on your cloud DVR or a Blu-Ray DVD that slowly collects dust with each passing year.

After seeing Fight Club for the first time, some cinema enthusiasts want to immediately shave their head, live in a dilapidated house on some industrial side street, join an anarchist organization, fight a random stranger and end with a handshake and a hug, and commit acts of peaceful sabotage against the organized powers of corporate America. The cinematography carries you in its arms with delicate, bare knuckled, blood stained mittens as the narrative (maybe one of the top five greatest narratives of all time) speaks the grittiest, most honest, and untouchable lines that can only be duplicated in today’s day and age. They say imitation is the most sincere form of flattery, and Fight Club led us into a new millennium in which story lines and fictional characters were slowly going to be a copy, of a copy, of a copy, of a copy.

I cannot recall the many times I let the movie play as I slowly fell asleep and let my subconscious take over. Some people like to drift away in a dark room with no electronics, while others prefer to listen to a blowing floor fan, rain shower, a crackling fireplace, or nothing at all. Some of us take the extra step and diffuse the entire room in different essential oils. Now, as I live in the present as an adult teenager with a relentless imagination, I find myself sailing away with the aid of some of those things I previously mentioned. Back then, in the past living as high school nonconformist going off to college, all I wanted (warning: Spoiler Alert – like, “he’s dead the entire movie in the Sixth Sense“, kind of Spoiler Alert – wait, oops) was to watch Tyler Durden and his imaginary friend/self create mischief while rendering human fat into soap and fussing over a pretentious girl named Marla Singer.

So on this day, I would like to don a new writer’s group known as Blog Club, and the rules of our club are listed at the beginning of this post. Project Mayhem Bloggers and Writers, I hope your pens stay full of ink, your finger taps be accurate and sharp, and your paper be as pristine as freshly fallen snow. In Blog Club, we own our original narrative, imitate what we must, and transform our work into the Rosetta Stone of the future, just as our favorite books and movies have done for us. In Blog Club, we see the scenes laid out before us in our mind’s eye and serenade the audience with the lens of our camera. If the story is good, they will remember it. Lastly, in Blog Club, we never doubt ourself, because we all know what doubt does to dreams and dreamers.

We are writers, yes, and we would be lying if we did not admit that it is one of the loneliest jobs that ever existed. Some of us might as well been placed in an adjacent solar system on a planet that is void of all civilization. Death would be the only thing waiting for us, and in death, a writer of Blog Club has a name.

There is hope, even though losing all of it would be freedom, and we will find it together as we write until the stars fall from the sky. We may lose ourselves in oblivion, dark, silent, and complete, but we do not have to do it alone, even if we do let go of the rails for a minute or two. Be strong my fellow bloggers, writers, and adventurers.

We are Blog Club, world, and we will not go down without a fight.

(Cue “Where Is My Mind” by The Pixies)

“I don’t want to die without any scars!”

“This is your life and it’s ending one moment at a time.”

“You know how they say you only hurt the ones you love? Well, it works both ways.”

“The things you own end up owning you.”

“At the time, my life just seemed too complete, and maybe we have to break everything to make something better out of ourselves.”

“If you don’t know what you want,” the doorman said, “you end up with a lot you don’t.”

“I am Jack’s complete lack of surprise.”

“Worker bees can leave. Even drones can fly away. The Queen is their slave.”

“If you died right now, how would you feel about your life?”

“We buy things we don’t need with money we don’t have to impress people we don’t like.”

4 Replies to “The First Rule of Blog Club…”