I Rigged the Election 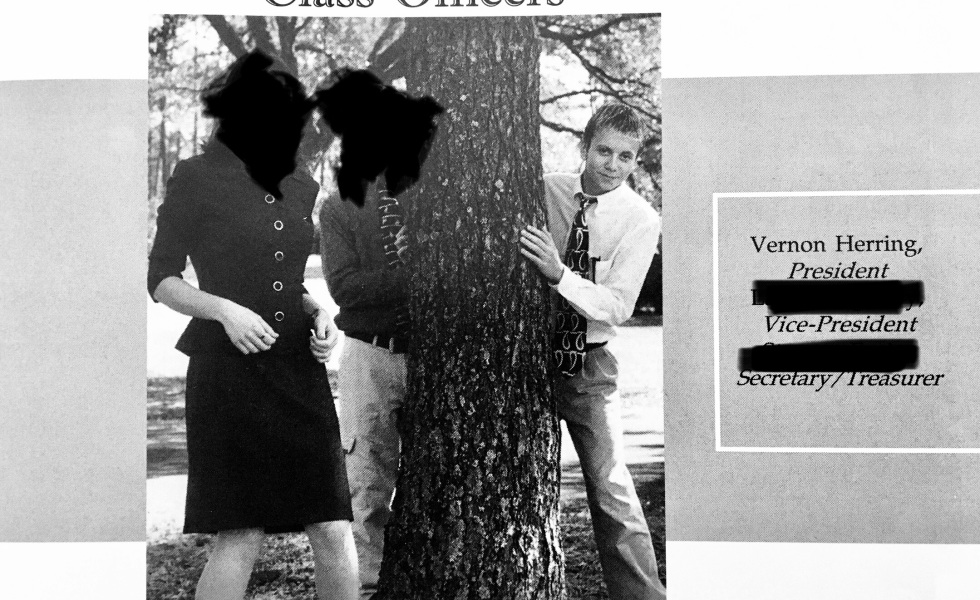 When I was a senior in high school, the time came to hold class elections for the offices of President, Vice President, and Secretary slash Treasurer. There were no secret ballot boxes or us having to deliver open ended promises through platform preaching. The ones interested in running for office did not have to go on nationwide propaganda trails and be backed by the donations of special interest groups. When we voted, our class of less than thirty laid our heads on our desks, covered our eyes with our arms, and silently raised our hands for the candidate we wanted to vote for.

If you haven’t tied in the clues by looking at the featured image, I was the lucky weasel (with the longest tie in the galaxy!)

When I heard the future Valedictorian and Salutatorian discussing who they wanted to nominate for what office, I was disgusted and devised a foolproof plan of resistance. At the time, I did not care about being President. I did not care about politics. I did not care about the numerous, prestigious, make believe titles that a private Christian school could hand out. What I did care about was the underlying ethics when it came to the somewhat smarter ones of the class thinking they were going to be handed a position without any type of struggle and steamroll over our tight knit group of boys and handful of girls.

Out of somewhere, the oldest and most efficient war strategy popped inside my head. It is an attack mechanism that can go cloaked as the people around its effect are slowly consumed one by one. This current ploy continues to provide more than adequate results in the world of today when it comes to race, religion, politics, sexual orientation, friendships, relationships, families, council voting, social class castes, businesses – small and large, and any other thing that you, the reader, would like to add to it.

I quickly counted the people in our small group, and we had the same number of voters as the Gang of Girls. I knew, since we were going by popular vote alone, if we nominated more than one girl from their group and stuck to nominating one of ours, their brains would instantly complicate things. I knew they would not have enough time to unravel the mysterious plot that had formed and, ultimately, they would be distracted by focusing on their crowded vote as we snuck underneath the radar and seized Election Day.

When the attack was unleashed, it was too beautiful to look away and not savor. Each time we named a girl from their group, they looked at us, smiled, and could not comprehend how unselfish we were being by throwing their names into the pool for the noble positions of senior class office. The only reason we did not win the Vice Presidency is the fact that our nominee voted for the other candidate instead of keeping his vote for himself, which shows a certain nod of chivalry that modern day politicians, male and female, know nothing about.

By the time we shot our arrows and cleaned the battlefield, our side had captured two out of three positions, and we waved our metaphorical boxers in the air. There was no recount to drag out for the next couple of months or tax wasting filibustering by reading a children’s book to stall the inevitable and waste even more taxpayer money. The popular vote had been divided and conquered.

When I turned eighteen and was allowed the privilege to vote in the national election, I scrunched up my lips and shrugged my shoulders because the entire process seemed too much like a board game that comes with a set of instructions controlling your every move while also being written against your favor. Over the past twenty years, there has not been a single candidate or nominee that I fully agreed with, liked, favored, much less trusted enough to see as the angry and visibly discontented face of our nation.

If one observes the Republicans and Democrats long enough, you begin to realize that they start to look like a conglomerate of suited gang members, backed by special interest money, operating by a set of rules that apply only to them and not us. Capitol Hill and the special committees that exist there are nothing more but modern day, suit and tie, Blood and Crip street gangs in which guns are microphones and pens, trash talking are lies and open ended promises, and brown bagged forties are filet mignon dinners, expensive bottles of wine, and fully paid junkets to country clubs and beautiful foreign countries that I can only dream of visiting one day if I can save up enough money to travel there. (Shout out to France 🇫🇷)

People will immediately retort as they wear their I VOTED sticker, “well, if you don’t vote, then don’t complain. You cannot have an opinion if you do not show up at the polls.”

I’m like, “well, as long as I’m paying state and federal taxes on my income, paying state taxes to own and drive a vehicle on a worn out asphalt road, paying county land taxes so my house can sit on a piece of dirt that I am led to believe that I own, and am paying county and state taxes on every purchase I make at whatever store I shop at, then I can have my own opinion when it comes to our governmental control mechanism. The real question would be – do you think our governing bodies take more from ‘we, the people’ than they give back? This nation was founded by rebels and is protected by brave soldiers, so how well is our government at succeeding in dividing and conquering us based upon our race, religion, socioeconomic statues, and orientation?”

I’m not going to drag this post out and waste precious time by dissecting the positive and negative qualities of some of the presidential, Senate, and House candidates we have been introduced to and what they stood for because, in my opinion, all of them suck in their own way (especially the angry and bitter ones – women included). If all else fails, I have a worn out vacuum cleaner, clogged with years of hair, dust, lint, and crud from the floor, that sucks less than what the past two decades have given us as a nation of taxpayers, honorable veterans and active military, and free minded civilians. For all we know, a total reset of the government, as well as liquidating unnecessary offices and positions, while giving the taxpayer a four year income tax break, could benefit us more than a new bill or law or more government expansion. There is a good chance I could be wrong, but then again how promising does the future look when the best leaders we can pit against one another are a deep pocketed egomaniac and a sly tongued used car salesman.

This post boils down to one thing and then I formally abandon my dust covered political soap box until it is time to discuss and promote my second unpublished fictional novel, Drowning Skylight. (I will share the query to this beautiful book and dedicate my next blog post in its memory. I copyrighted Drowning Skylight back in 2010, and I believe it is more prevalent now than it ever has been.)

The key to the castle is this – if me, a broke nobody with lint filled pockets, little political knowledge, and some curb appeal, can rig an election and not have a teleprompter to read from so I will not stray from the global powers’ boring and lackluster script, just imagine what the right person, with a lot of fame, fortune, and ego, could do with unlimited power, a full ink pen, and no resistance.

Yeah, you’re right about what you just thought!

The possibilities are as endless as the sunsets in Hawaii.

Push Play : Thank You for Reading : Feel Free to Share my Site with a Friend

1 Comments on “I Rigged the Election”